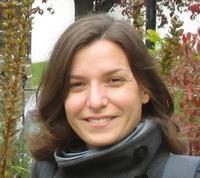 Cecilia Tarruell is a Newton International Fellow of the British Academy at the Faculty of History, University of Oxford. Prior to her current post, she was a Max Weber Fellow at the European University Institute in Florence (2015-2016). She completed her PhD in early modern history at the École des Hautes Études en Sciences Sociales in Paris and the Universidad Autónoma de Madrid in November 2015.

Cecilia Tarruell’s research focuses on the Spanish Empire and the analysis of Christian-Islamic interactions in the Mediterranean area during the sixteenth and seventeenth centuries. She is particularly interested in the processes of (re)integration and assimilation in Europe — and beyond — of individuals and social groups with extensive experiences both in Christian and Islamic lands. She examines these processes by analysing different kinds of human circulation across the Mediterranean.

During her PhD, her research focused on forms of coerced mobility. To this end, she analysed long-term Christian captivity and enslavement in Morocco and the Ottoman Empire by looking at individuals who, upon their return to Christian lands, served the Hispanic monarch during the late sixteenth and early seventeenth centuries.

Cecilia’s current research project develops a wider study of forms of voluntary circulation across the Mediterranean. In particular, the project revolves around the voluntary arrival and settlement in the territories of the Spanish Empire of Muslim, Jewish and Christian populations coming from the Ottoman Empire, the Safavid Empire and Morocco, most of whom converted to Catholicism as part of the process of migration. By challenging common ideas about the very existence of such phenomena, and conventional representations of the Spanish Empire in historiography as a land of expulsion of religious minorities, this project explores the more complex reality of multiple forms of migration flows connecting Islamic and Christian lands during the sixteenth and seventeenth centuries.