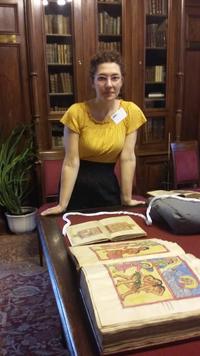 Celeste Gianni is research associate in Arabic manuscripts. From 2018–2019, she taught Introduction to Arabic literature at SOAS, University of London.

Her research primarily focuses on the history and development of libraries, book culture and the philosophy of classification of knowledge in the Middle East. She works with library collections and catalogues with a focus on Arabic manuscripts, Arabic early prints and Arabic documents. Her approach is to look at how material elements of book culture influenced the cultural production, both written and oral, in the Arabic language at different historical times.

Celeste has collaborated with researchers in several other disciplines related to Arabic manuscript studies, particularly on projects related to Arabic sources and Middle Eastern artefacts from the Renaissance and early modern period in Italy.