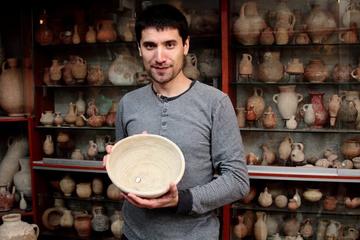 Sergey Minov received his doctorate in 2013 from the Hebrew University of Jerusalem. He completed his thesis, entitled Syriac Christian Identity in Late Sasanian Mesopotamia: The Cave of Treasures in Context, at the Department of Comparative Religion. After completing his doctoral studies, he spent a year at the Institut für Judaistik (Freie Universität Berlin) as an Alexander von Humboldt research fellow, working on the project “Invention of Biblical Places and Formation of Cultural Memory in late antique Syria-Mesopotamia”.

Sergey devised and is presently engaged in updating a long-term digital project The Comprehensive Bibliography on Syriac Christi­anity, supported by the Center for the Study of Christianity (Hebrew University of Jerusalem): http://www.csc.org.il/db/db.aspx?db=SB.

From 2014 - 2018 he was a Research Associate for the ERC project 'The Cult of Saints' which investigated the origins and development of the cult of Christian saints in Late Antiquity.

“The Cave of Treasures and Formation of Syriac Christian Identity in Late Antique Mesopotamia: Between Tradition and Innovation,” in: B. Bitton-Ashkelony and L. Perrone (eds.), Between Personal and Institutional Religion: Self, Doctrine, and Practice in Late Antique Eastern Christianity (Cultural Encounters in Late Antiquity and the Middle Ages 15; Turnhout: Brepols, 2013), 155-194.

“Marriage and Sexuality in the Book of Steps: From Encratism to Orthodoxy,” in: K.S. Heal and R.A. Kitchen (eds.), Breaking the Mind: New Studies in the Syriac “Book of Steps” (CUA Studies in Early Christianity; Washington, DC: The Catholic University of America Press, 2014), 221-261.

Together with Alexander Kulik (Hebrew University of Jerusalem), he has prepared an edition of an anthology of Slavonic pseudepigraphical texts accompanied by English translation and extensive commentary, which is about to be published by Oxford University Press as Biblical Pseudepigrapha in Slavonic Tradition. He is currently completing a monograph based on his doctoral dissertation.

Sergey’s research interests include the history and culture of Syriac Christianity in Late Antiquity and the Middle Ages, Jewish-Christian relations in the Near East, Jewish and Christian traditions of biblical exegesis and apocryphal literature.