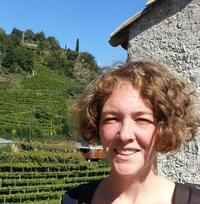 Valentina Duca received her doctorate in 2019 from the University of Oxford, with a thesis on the 7th century Church of the East writer Isaac of Nineveh (‘Exploring Finitude’: Weakness and Integrity in Isaac of Nineveh), after studies in Theology, History of Religions, and Eastern Christianity (MPhil, Oxford, 2013). Her research focuses primarily on 7th-8th century East-Syriac ascetic literature.

During 2018, she taught reading classes and tutorials on early Christian monastic literature in Syriac and 7th-8th century East-Syriac ascetic thought at the Faculty of Oriental Studies, Oxford. For the ‘Stories of Survival’ project, she is examining Syriac manuscripts’ catalogues, happy to explore the field, new to her, of Syriac culture in the Early Modern period.

‘A creaturely Wisdom’: Suffering, Compassion, and Grace in Isaac of Nineveh, forthcoming in the Scottish Journal of Theology