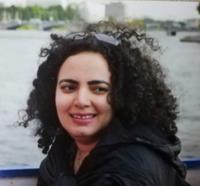 During her BA in Theology, Vevian became interested in the life of Eastern Christians in the Islamicate world. She wanted to study their translations of the Scripture which led her to undertake an M.A. in Middle Eastern Christianity in the Evangelical Theological Seminary in Cairo. Her thesis discussed the Coptic identity in relation to the Gospel translation of the thirteenth-century Coptic scholar Hibat Allah ibn al-ʿAssāl. Afterwards, she got a Th.M. in Biblical Studies from Princeton Theological Seminary.

As she joined the Biblia Arabica Project in Ludwig-Maximilians University, Munich as a Research Assistant, she wrote her doctoral dissertation on the transmission history of the Pauline Epistles in Arabic. Studying text transmission history (9th-15th centuries) was Vevian’s point of departure to examining the manuscripts that bear the texts, as well as the long line of scribes and readers, both Eastern Christians and European scholars, who actively used these manuscripts throughout the centuries.

Vevian is happy to start working on the “Stories of Survival” project, as she gets to focus more on Christianity in Egypt in the Early Modern period. This includes both the Copts as well as the Melkites in the Monastery of St. Catherine. For her, this means that she will be introduced to and in turn introduce more scribes and readers of Christian Arabic manuscripts to scholarship.